When I pack for a trip into the backcountry, the first things I make sure I have are the “Big Three.” Those three things are shelter, food, and water.

Now, shelter, food, and water can mean a variety of different things, and what you choose to take into the wilderness is, of course, solely dependent on the mission and your own personal preferences. “Shelter” can mean a luxurious, $10,000 dome tent, a portaledge on the side of a big wall, or a simple tarp. “Food” can mean a 10oz ribeye fit for a king, a protein bar, or a bag of raw almonds.

Water… well, water is water. It’s that simple. There’s no way around it. We all need access to clean water, whether we’re Bear Grylls or an 11-year-old on his first Boy Scout trip.

Out of the Big Three, none is more critical than water.

Shelter and food can be fudged now and again. I’ve slept in all manner of conditions and shelter, including on the ground for a couple of nights after my tent was torn up by marmots, and out in the open in a snow trench on the side of a mountain after being stuck in a blizzard. Similarly, I’ve bungled food preparations and gone without food for a few days at a time. With shelter and food, you can sometimes afford a mishap. You might be uncomfortable, but you can survive. With water, that’s not the case.

What is the Best Water Filter for Backpacking?

If you mess up your water system, whether by not having access to clean water or not having access to water at all, then at the very least you’ll probably have to call off your trip. If you’re somewhere more remote and run out of water or if you inadvertently consume contaminated water, you could easily become critically ill or even dead, within a few days.

In short, water is something you don’t want to fool around with. It’s the very first thing I make sure I sort out whenever I plan an expedition, whether it’s to my local state park or a wilderness region on the far side of the world.

Last weekend, I took my younger brother and the family dog out for a 26-kilometer overnight jaunt into Cheaha Wilderness, a 7,245-acre wilderness region in Alabama run by the US Forest Service. There was only one reliable stream to source water from on our route, and since we were bringing our dog we needed to carry even more water than usual.

Our sole water filtration system was Sagan Life’s XStream™ Straw, and it did an excellent job. 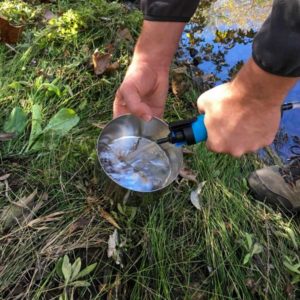 Most traditional filter pumps require both pushing and pulling, the former to expel the water and the latter to draw new water in through the filter. This naturally becomes quite tiring after a while, particularly after a long day climbing, paddling, or hiking.

The XStream™ Straw on the other hand uses a simple passive suction-style pump system. That means instead of pumping in and out, as you do with most handheld water filter pumps, you simply squeeze the XStream™ Straw’s silicone handle to pump the water, then release and the suction automatically fills the straw up again. A single squeeze provides a decent squirt of water.

This makes for a very easy pumping process, one that isn’t physically tiring at all. The XStream™ Straw was so easy to use, we ended up pumping water twice on my two-day trip, just for the heck of it. You can pump entire buckets with this and not tire your hand out. Also, since you’re only using one hand instead of two, like most pumps, it’s easy to swap hands if you do get tired, and on solo expeditions, this simple design allows you to hold your bottle or bladder with one hand and direct the stream with the other.

That said, this luxury comes with a couple of flipsides. It’s worth noting that you need to be prepared for the passive suction to take a second or two to fill back up after each squeeze, as opposed to traditional pumps where the water comes out as fast as your hands can pump it. 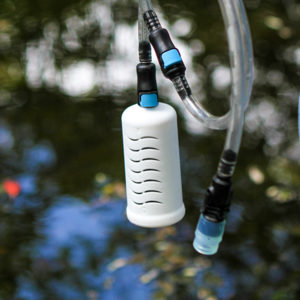 The XStream™ Straw also offers an extremely lightweight system, clocking in at 5oz with the straw itself, and 9oz with the hand pump. Aside from that, the entirety of the filter system is concentrated in the filter itself, which is about half the size of a soda can all around. When I was a Boy Scout, we used to always argue about who had to carry the water pump, because it was a clunky apparatus that took up a fair bit of space.

The hand pump itself is barely wider than the filter tube. The entire device, as a result, can be wound up like a hose and stowed almost anywhere in your pack (or even your pants pocket) for easy access. This is next to nothing compared to most pumps on the market, which are many times bulky affairs requiring both inflow and outflow tubes, and often both in-water auxiliary filters and then primary filters, usually coupled with the pumping apparatus. Of course, there are minimalist, lightweight filtration systems on the market now besides the XStream™ Straw, of course, but none that are as versatile (see below).

The XStream™ Straw is also the only water pump I’ve come across that offers an all-in-one system. You can use it as a traditional straw via the mouthpiece and drink straight from the water, or you can use it as a pump via the hand pump, which in turn has a powerful enough stream and handheld aim so it can double as a sprayer. Swapping these systems in and out is seamless, with a simple click-on attachment to exchange the mouthpiece for the pump.

As I mentioned, the sustained squirt from the pump means that in addition to using the XStream™ Straw to pump water, you can also use it to clean dishes, rinse off gear, and more.

Meanwhile, the XStream™ Straw’s Journey™ Water Filter is able to purify up to 250 gallons of contaminated water (independent laboratory tested to EPA standards), removing 99.9999% of bacteria and 99.99% of protozoan, and viruses without the use of iodine, chlorine, or any other chemicals. This all adds up to make an extremely versatile, functional water filtration package that can work well on the water, as well as in the high mountains, woods, jungle, or anywhere else.

The Length Is Incredible 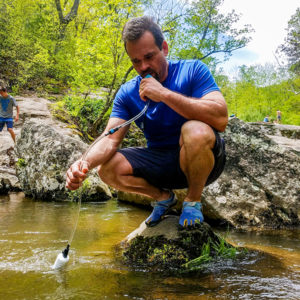 More than any other feature, the reach of the XStream™ Straw is what impresses. This straw is two feet (24”) long, and with an included extension tube, the length doubles to four feet (48”). Four feet of reach means you can access water from almost anywhere. I’ve done my fair share of slipping and falling while trying to get close enough to streams and creeks to pump water in the past, and with the XStream™ Straw, there’s no need for any of that.

There’s also no need to squat down or bend over in awkward positions near water sources. You can sit in a kayak or canoe and drink straight from the river with the mouthpiece, or you can sit back from the water on the shore of a lake or stream and pump into your canteen, take a sip, or wash clothes and dishes without getting wet.

The entire filtration component is situated on the end of the hose, as well, as opposed to having a primary and auxiliary filter as I mentioned above. This means that 100% of the XStream™ Straw’s four-foot length works to your benefit. There is no central pump requiring inflow and outflow hoses, cutting your usable length in half. The filter sits in the water, and everything that comes through that filter is clean, drinkable water.

The XStream™ Straw is a stellar choice for backpacking, climbing, kayaking, and other wilderness excursions where you need a lightweight, compact water filter that can function as both a direct water straw and a pump.

Check It Out Today!

Owen Clarke is an outdoor adventure journalist. He is a Contributing Digital Editor for Climbing and Gym Climber magazines, and a writer for Benegas Brothers Productions.

For more on the XStream Straw read this: Top 10 Reasons to go XStream